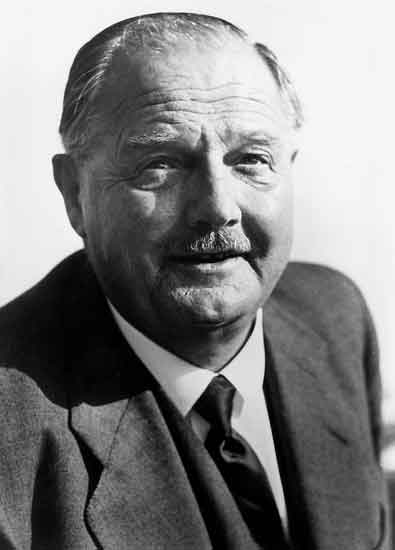 Julius Raab was born on 29 November 1891 in St. Pölten, Lower Austria. He, son of a master builder, studied Structural Engineering at the Vienna College of Technology. After World War I he joined his father’s construction business and became politically active. In 1927, he was elected Member of the Austrian National Council as member of the Austrian Christian Social Party. In 1938, he was appointed Minister of Commerce by Chancellor Schuschnigg for few weeks.

The National Socialists imposed a professional ban on him right after the “Anschluss” in 1938. After the end of World War II in 1945, he immediately became politically involved again. He was a co-founder of the Austrian People’s Party (ÖVP) and the Enterprise Union (Wirtschaftsbund). As President of the Federal Chamber of Commerce and Industry (today’s WKO), he and Johann Böhm, then-President of the Austria Trade Union Federation (ÖGB), were crucial for the establishment of the Social Partnership (Sozialpartnerschaft) since 1947. In 1953 he succeeded Leopold Figl as Chancellor. His economic policies set the course for the rebuilding of Austria. He was responsible for the new economic concept (“Raab-Kamitz-Kurs”) which stabilised the Austrian currency, made full employment possible and enabled the development of the welfare state that contributed greatly to the “economic miracle”. Raab promoted the European Integration (EFTA accession) and was a driving force behind the then stagnating Austrian State Treaty negotiations when he put the idea of Austrian military neutrality forth. His prestige as Chancellor of the economy and freedom as well as master builder of the “economic miracle” was at its peak during the signing of the Austrian State Treaty in 1955. Julius Raab passed after a long illness on 8 January 1964.

It must be noted that Julius Raab was leader of the Lower Austrian Heimwehr, an anti-semitic and anti-democratic paramilitary organisation in 1930. The Julius Raab Foundation repudiates these beliefs in the strongest terms as they contradict its beliefs and values.